Chris Jericho is a professional wrestler currently performing with AEW, having spent the majority of his career previously with WWE.

Jericho is one of the most decorated and popular performers in the history of professional wrestling and has become famed for his ability to continue to reinvent himself to keep his personality as fresh as possible.

At the age of 19, Chris Jericho joined the Hart Brothers School of Wrestling to be trained by Stu Hart, and from there wrestled for various independent promotions primarily in Canada, the United States, Japan and Mexico.

In 1995 he would join ECW for a short period, winning the ECW World Television Championship.

A year later he would join WCW where he would become involved in acclaimed feuds with the likes of Rey Mysterio, Dean Malenko and Juventud Guerrera.

Jericho would win the WCW World Television Championship from Stevie Ray, but around this time became disillusioned with life at the company as he felt he was being held back from becoming a main eventer. This was highlighted when he continually attempted to force a feud with Goldberg, only to be kept away from the main event picture.

He would subsequently leave and not long after would join WWE.

Jericho would make his debut on the August 9th, 1999 edition of Monday Night Raw in one of the most famous segments in history.

After his famous Millennium Man countdown clock reached zero, his music hit as he interrupted a promo by none other than The Rock.

Jericho’s debut was met with acclaim and remains one of the most memorable of all time.

Though Jericho debuted as a heel and initially became involved in a feud with Chyna over the Intercontinental Championship, he was so well received that he eventually turned babyface, winning the title outright at the 2000 Royal Rumble.

At Wrestlemania 2000, he won the European Championship in a Triple Threat Match with Chris Benoit and Kurt Angle.

Throughout 2000 Jericho was in and out of the main eventer picture, as although he would never win the title, one of the most popular feuds of the year involved himself and Triple H.

Jericho did actually win the WWE Championship on an edition of Monday Night Raw against The Game with the crowd going bananas, but it was soon stripped of him after referee Earl Hebner was deemed to have performed a fast count.

His main adversary throughout 2000 and early 2001 was Benoit as the pair would lock up in a series of critically acclaimed matches like a submission match at Backlash and a Ladder Match at the 2001 Royal Rumble.

He would retain the IC title at Wrestlemania 17 before losing it a few days later to Triple H. Thereafter, he would form a tag team with former foe Benoit to win the Tag Team Titles.

In 2001 Jericho played a huge part in the Invasion angle as part of team WWF, winning the WCW Championship versus The Rock, though he would turn heel in the five-on-five Survivor Series Winner-Takes-All match.

At Vengeance 2001, he would defeat Stone Cold Steve Austin and The Rock on the same night to become the Undisputed Champion which at that time meant holding both the WWF Championship and the World Heavyweight Championship.

He would lose the Undisputed title to Triple H at Wrestlemania 18.

Over the course of the next year his heel persona continued, and did into Wrestlemania 19 when he was defeated by one of his heroes, Shawn Michaels.

Over the period of 2003, he would team with and feud with Christian.

Jericho would eventually become involved in a feud with WWE Champion John Cena, and left the company for a period after losing a You’re Fired Match..

After two years away, WWE started showing cryptic binary codes promising someone to come and ‘save’ the company. This person proved to be Jericho, who returned in November of 2007 as a babyface.

Jericho would later admit to feeling stale in his ‘Y2J’ persona by this point, and so opted to turn heel, becoming a slow-talking, suit-wearing, big-word-using villain inspired by Anton Chigurh from No Country For Old Men.

In this persona he would become involved in an acclaimed feud with Shawn Michaels and would win the World Heavyweight Championship at Unforgiven 2008 in a Championship Scramble Match.

Around the time of Wrestlemania 25 Jericho became involved in a feud with actor Mickey Rourke, who at that time had finished filming The Wrestler. At that event, with Rourke at ringside, he would face legends Ricky Steamboat, Jimmy Snuke, and Roddy Piper.

Over 2009 into 2010 Jericho would team-mate with Edge to with the Tag Team Championships. After Edge got injured Jericho replaced him with The Big Show, with the pair forming the ‘Jeri-Show’ tag team.

When Edge returned from injury at The Royal Rumble to eliminate Jericho, the pair would subsequently face each other for the World Heavyweight Championship at Wrestlemania, with Jericho winning before dropping the title not long after to Jack Swagger.

Not long after, he would take another break from the company to focus on his band Fozzy.

Jericho would ultimately return to RAW as a heel and after being eliminated from the Royal Rumble, would start a feud with WWE Champion CM Punk, eventually losing at Wrestlemania and the Backlash.

Over the next few years Jericho would become involved in programs with the likes of Randy Orton, Seamus, Kofi Kingston, The Wyatt Family, The Miz, Cesaro, AJ Styles, and Dean Ambrose.

In 2016 Jericho would align himself with Kevin Owens and at the same time debut ‘The List of Jericho’ – a list of all those who had wronged him.

The gimmick became extremely popular among fans and would often receive huge pops.

The pair would break up in the infamous ‘Festival of Friendship’ promo on RAW which saw Owens turn on his friend.

They would face each other at Wrestlemania 33 for the United States Championship, though the match was initially meant to be for the Universal Championship before Vince McMahon booked Goldberg and Brock Lesnar for that belt instead.

It was this decision which ultimately prompted Jericho to leave the company.

In November of 2017, Jericho made a surprise appearance at New Japan Pro Wrestling, challenging Kenny Omega to a match at Wrestle Kingdom 12. He would go on to lose the match, but it was critically acclaimed and received five stars from the Wrestling Observer Newsletter.

The night after he would attack Tetsuya Naito and eventually win the IWGP Intercontinental Championship.

At Dominion 6.9, Jericho challenged Kazuchika Okada for the IWGP Heavyweight Championship but was defeated. He would redeem himself later with a victory against Hiroshi Tanahashi at Wrestle Kingdom 14, however.

In January of 2018, Jericho would formally announce himself as part of new company, All-Elite Wrestling.

Att the promotion’s inaugural event, Double or Nothing, he would become the first ever AEW World Champion by defeating Kenny Omega.

After this, he would form heel faction The Inner Circle which consists of Jake Hager, Sammy Guevara, Santana and Ortiz.

He remains part of AEW and has also been involved in feuds with Adam Page, Jon Moxley and MJF.

What is Chris Jericho’s height?

What is Chris Jericho’s real name?

Who is Chris Jericho married to?

Chris Jericho has been married to Jessica Lockhart since 2000. They have three children.

What is Chris Jericho’s net worth?

Chris Jericho’s net worth is estimated to be around $18 million.

What is Chris Jericho’s theme?

Chris Jericho’s theme in AEW is ‘Judas’ by his own band, Fozzy. Prior to that in WWE it was ‘Break Down The Walls’.

What is Chris Jericho’s finisher?

Chris Jericho has had a number of finishers over the years, including ‘The Walls of Jericho’, ‘The Lionsault’, ‘The Codebreaker’ and ‘The Judas Effect’. 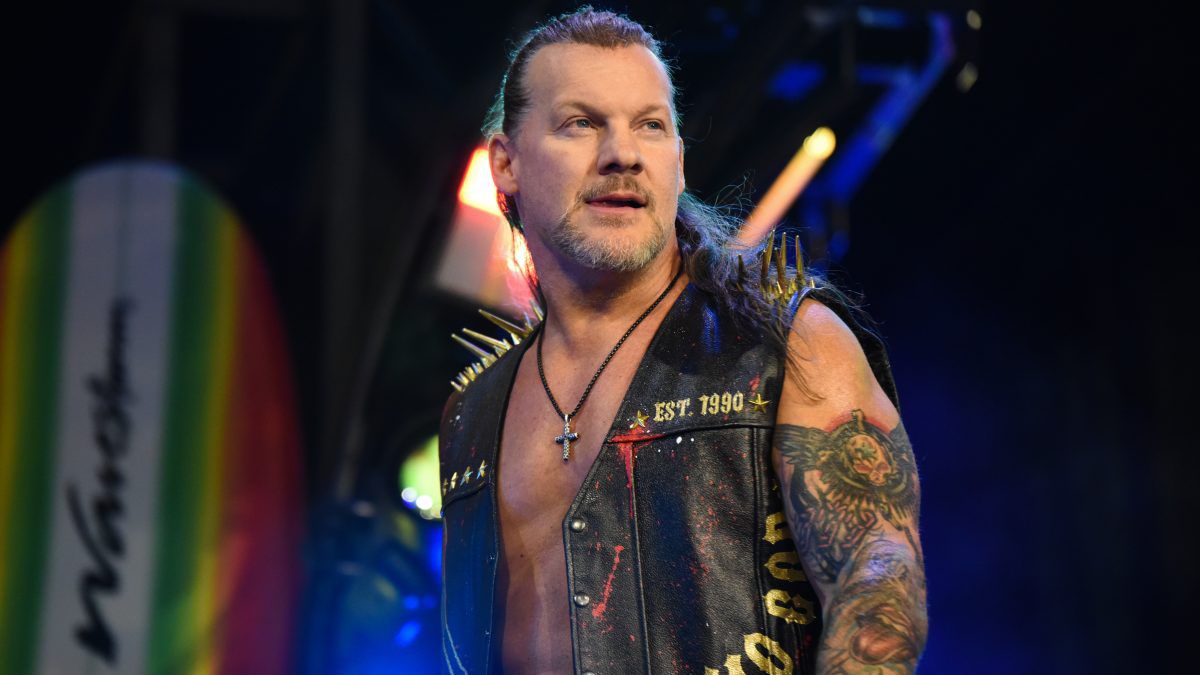 Chris Jericho slammed for his take on gimmick match 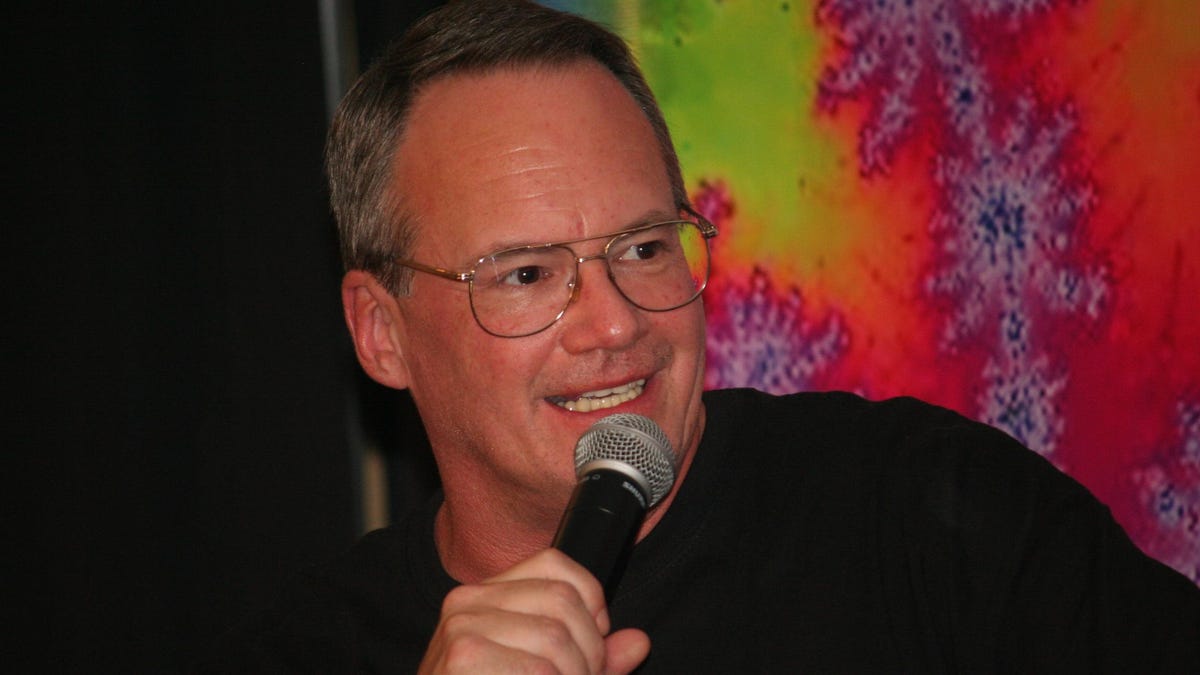 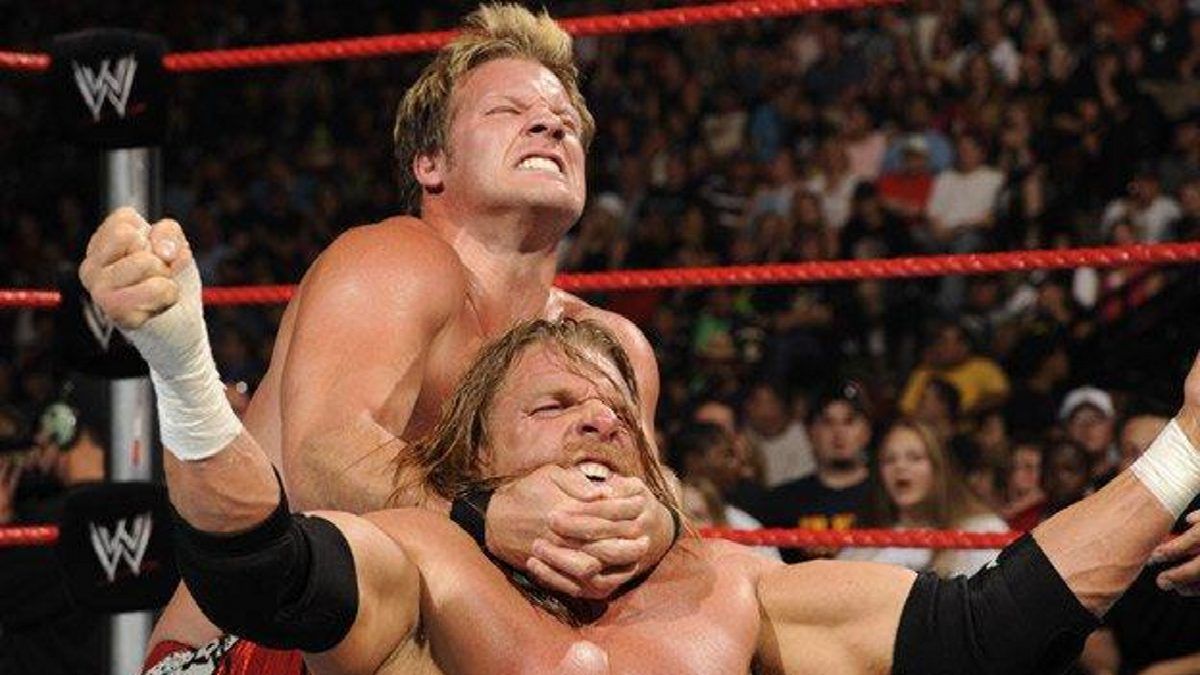 Chris Jericho reveals hilarious nickname he has for Triple H