Andre the Giant is a former professional wrestler, recognised as one of the biggest draws and most famous names in the history of the business.

When Andre was a child in became clear he had acromegaly, and it would be his larger-than-life and personality which made him one of the most beloved wrestlers ever.

Andre started his professional wrestling career in Paris before eventually working in Japan and then Canada.

In 1973 he debuted for the World Wide Wrestling Federation which would later become the WWF.

In just his second match with the company, he fought Buddy Wolfe at Madison Square Garden.

Throughout the 1970s and into the early 1980s Andre was one of the biggest babyface wrestlers around, so much so that he acted in the babyface role in a feud with Hulk Hogan as the heel in Japan.

At the time when the WWF was still a territory, Andre features for numerous other independent promotions, but in 1982 he signed exclusively with Vince McMahon Jr after the company was purchased from Vince McMahon Sr.

One of his famous early feuds with the company saw him pitted against ‘Mongolian Giant’ Killer Khan, with Khan kayfabe breaking Andre’s ankle.

He would then feud with another ‘Big Man’ of professional wrestling, Big John Studd, whom he would face at the very first Wrestlemania.

At Wrestlemania two he won a 20-man battle royal.

After taking time off to film The Princess Bride, he would return and eventually turn heel for the first time in his career, aligning himself with Bobby ‘The Brain’ Heenan.

Andre was turned heel in order to face the biggest babyface in the business at the time, Hulk Hogan.

Prior to Wrestlemania III, Andre had never been pinned in the WWF, but eventually succumbed to a loss against Hogan after a body slammed dubbed as “the bodyslam heard round the world”.

WWF promoted that this was the first time Andre had ever been scooped up, but in reality various wrestlers, including Hogan himself, had done it outside the company years before.

The feed with Hogan would continue throughout the year, with Andre eventually aligning himself with Ted DiBiase to try and take down the Hulkster.

At the inaugural SummerSlam pay-per-view held at Madison Square Garden, Andre and DiBiase (billed as The Mega Bucks) faced Hogan ‘Macho Man’ Randy Savage (known as The Mega Powers) in the main event, with Jesse ‘The Body’ Ventura as the special guest referee.

At Wrestlemania five he faced Jake ‘The Snake’ Roberts.

From 1989 into 1990 Andre joined with fellow Heenan Family member Haku to form a new tag team called the Colossal Connection, with the pair going on to win the Tag Team Championships.

From late 1990 onwards until his retirement with the WWF, Andre was mostly used in multiple-man matches in order to hide his declining health and age.

Andre performed for All Japan Pro Wrestling and Universal Wrestling Association before his retirement.

As well as The Princess Bride, Andre appeared in other films like Conan the Destroyer and Trading Mom.

On 28 January 1993, Andre Rene Roussimoff passed away by heart attack in Paris.

Andre the Giant was the first ever professional wrestler inducted into the WWE Hall of Fame in 1993.

A legendary drinker, Andre was known for drinking over a hundred cans of beer in a single sitting. An unconfirmed rumour remains that Andre drank 13 bottles of wine before the most famous match of his career against Hulk Hogan at Wrestlemania III.

What was Andre the Giant’s height?

Andre the Giant’s height was billed at seven-foot-four inches tall.

What was Andre the Giant’s real name?

Who was Andre the Giant married to?

Andre the Giant was never married.

What is Andre the Giant’s theme?

Andre the Giant’s theme is known as ‘The Eighth Wonder’ 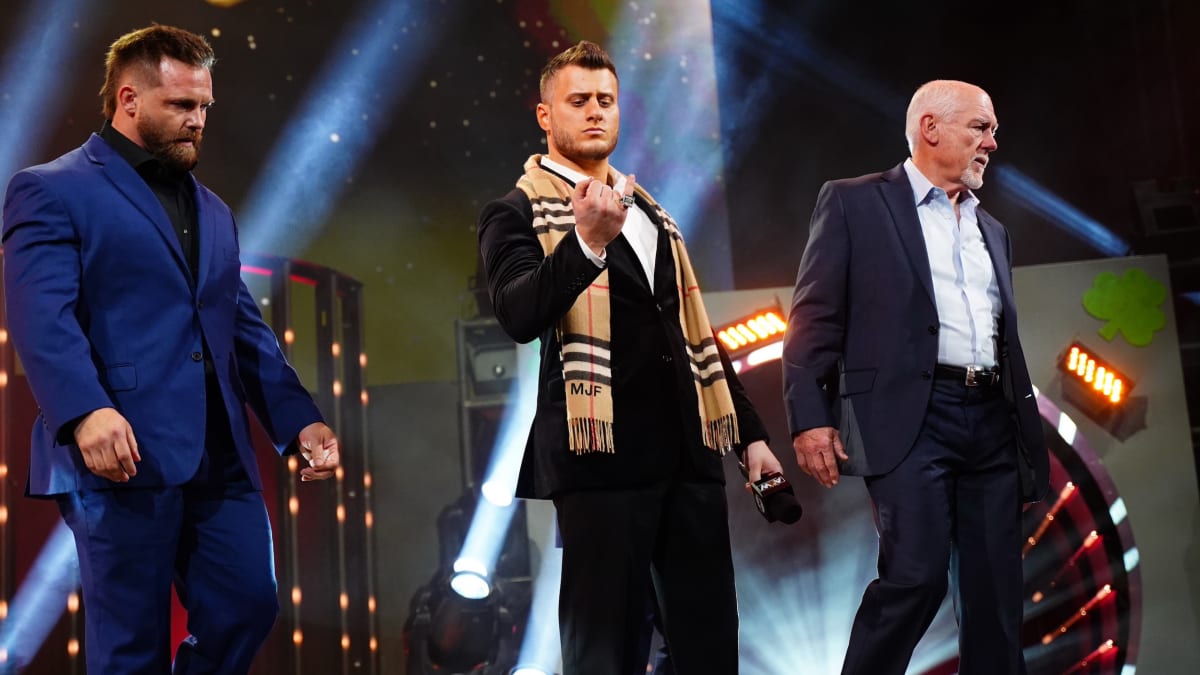 MJF compares himself to WWE Hall of Famer Andre The Giant