Kurt Angle is a retired professional and amateur wrestler, having found initial fame and success at the 1996 Olympic Games when he won the Gold Medal in heavyweight freestyle wrestling.

After graduating from college, Angle continued to wrestle with Olympic aspirations and initially trained under Dave Schultz at the Pennsylvanian Foxcatcher Club before his mentor was murdered by John du Pont, the sponsor and bankroller of the team.

Angle left not long after Schultz’s death but continued to train for the Olympics and eventually made it to the Games despite previously suffering a serious neck injury in which he fractured two of his cervical vertebrae, herniated two discs, and pulled four muscles.

He would defeat Iranian Abbas Jadidi to earn his Olympic Gold Medal in Atlanta.

Following the Olympics, Angle was offered a 10-year deal by WWE but initially declined the offer from Vince McMahon, believing professional wrestling to be a facade compared to non-scripted amateur wrestling.

After then watching the product, Angle was enamoured with the athleticism on show, and eventually contacted WWE, with the company offering him a new, shorter deal.

Before, that, he would make a fleeting appearance at an ECW show, only to react in horror at the infamous crucifixion angle between Raven and the Sandman.

Angle would spend a short period in WWE developmental before being fast-tracked to the main roster.

He would go on to enjoy the most successful debut year in the history of the company.

Angle made his PPV debut at the 1999 Survivor Series, defeating Shawn Stasiak.

He would go on a long winning streak, eventually losing to Tazz at the 2000 Royal Rumble.

Though his character would have been perceived as a babyface, as he urged people to use their Intensity, Integrity, and Intelligence, it was received negatively by fans, who treated him as a heel.

Angle would subsequently embrace the boos, gaining heat by insulting the fans and their home cities.

He would go on told hold the Intercontinental Championship and the European Championship at the same time before losing both at Wrestlemania 2000 against Chris Jericho and Chris Benoit.

After a short feud with Triple H which involved Stephanie McMahon, he received a major push and went on to win the WWF Championship after defeating The Rock at No Mercy.

He would have feuds with the likes of The Rock and The Undertaker and managed to defend the title inside Armageddon Hell In a Cell against that duo plus Triple H, Stone Cold Steve Austin, and Rikishi.

Angle dropped the belt to The Rock at 2001’s No Way Out and faced Chris Benoit at Wrestlemania 17.

Throughout that year, he would be heavily involved in the Invasion Angle, eventually as a triple agent, turning on WWE before eventually proving the company’s saviour in the Winner Takes All Match against WCW and ECW at Survivor Series.

Thereafter, he would shave his hair bald after losing a match to Edge.

At Wrestlemania 18 he defeated Kane.

Across the back end of 2002 he would form a partnership with former foe Benoit to win the Tag Team Championships.

He won his third WWE Championship at Armageddon, defeating the Big Show, before facing Brock Lesnar at Wrestlemania 19.

Angle lost that match as he required surgery, again to repair his damaged neck.

Upon his return he would feud with Lesnar over the WWE Championship and eventually won it back from Lesnar at Vengeance before losing it again in an Ironman Match on Smackdown.

At Wrestlemania 20, he battled Eddie Guerrero for the title and lost.

In November of 2004 he was involved in an infamous angle on Smackdown when he was legitimately put in a Kimura Lock by Tough Enough winner and MMA fighter Daniel Puder, who attempted to, for real, make Angle tap out.

Angle didn’t, though he was furious backstage at being non-kayfabe surprised by Puder.

After being eliminated from the Royal Rumble by Shawn Michaels in 2005, The Olympic Hero would return later in the match to eliminate HBK as payback.

This would set up a match between the pair at Wrestlemania 21. The match is widely considered to be one of the greatest in the history of the event, with Angle going on to win via the Ankle Lock.

Ange would win the World Heavyweight Championship in a battle royale on Smackdown and subsequently defend it against The Undertaker at No Way Out.

At Wrestlemania 22, he dropped the championship in a triple threat match against Randy Orton and the eventual winner Rey Mysterio.

He was then moved to the newly-reformed ECW Brand where he was known as the Wrestling Machine.

In August 2006, he was granted early release from his WWE contract to focus on his health after various injuries as well as personal issues.

After a break, Angle signed a deal with TNA and made his debut for the company in an October 2006 edition of Impact.

His initial feud in TNA was against Samoa Joe, before he subsequently feuded with the likes of Christian Cage, AJ Styles and Scott Steiner.

He would win the title in the Main Event Mafia period, often feuding with Jeff Jarrett, AJ Styles, and his estranged wife Karen Angle.

Between 2009 and 2011, Angle would be involved in TNA programs with Ric Flair and Hulk Hogan among many others.

In his final years with the company, he would go up against heel factions Aces and Eights and Immortal.

He would wrestle for various independent organisations including Insane Championship Wrestling before returning to WWE in 2017 when it was announced he would be inducted in the WWE Hall of Fame.

Angle was inducted by friend and foe John Cena, with the pair having enjoyed acclaimed feuds in the past.

He was subsequently made the General Manager of RAW and made his in-ring return after 11 years at TLC, teaming with The Shield and replacing the injured Roman Reigns.

At Wrestlemania 34, he teamed with iconic MMA star Ronda Rousey to defeat Triple H and Stephanie McMahon in a mixed tag team match.

He was part of Team Raw at 2018’s Survivor Series.

At Wrestlemania 35, he took part in his retirement match against Baron Corbin.

What is Kurt Angle’s height?

What is Kurt Angle’s real name?

Who is Kurt Angle married to?

Angle is married to Giovanna Yannotti. From two marriages he has six children.

What is Kurt Angle’s net worth?

Kurt Angle’s net worth is estimated to be around $25 million.

What is Kurt Angle’s theme?

What is Kurt Angle’s finisher?

Kurt Angle’s finishers are the Ankle/’Angle’ lock and the ‘Angle/Olympic Slam’. 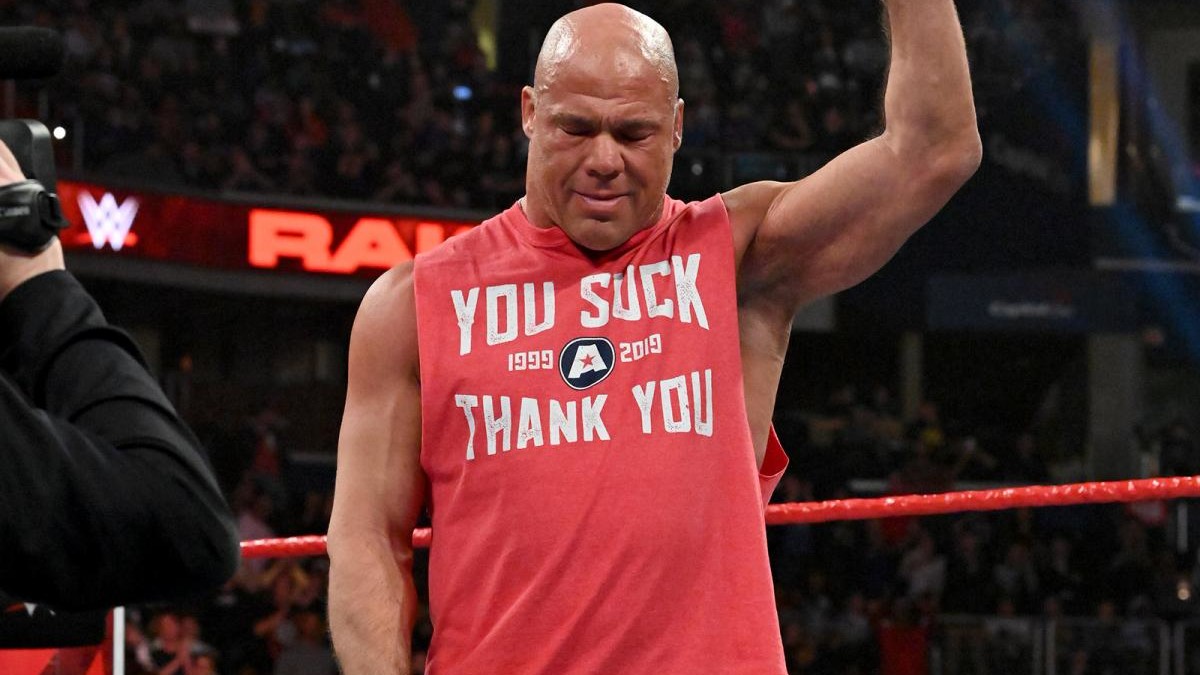 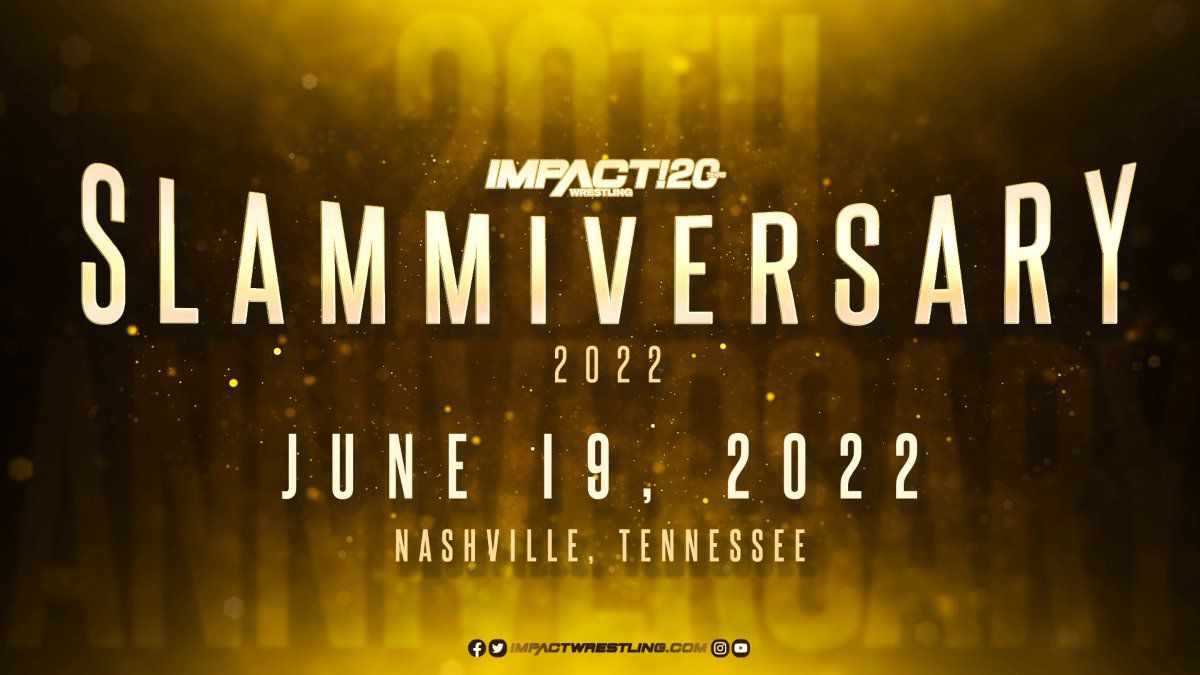 Today’s issue of The Wrest Is History focuses on the TNA Slammiversary PPV event from 2009, featuring TWO King of The Mountain matches 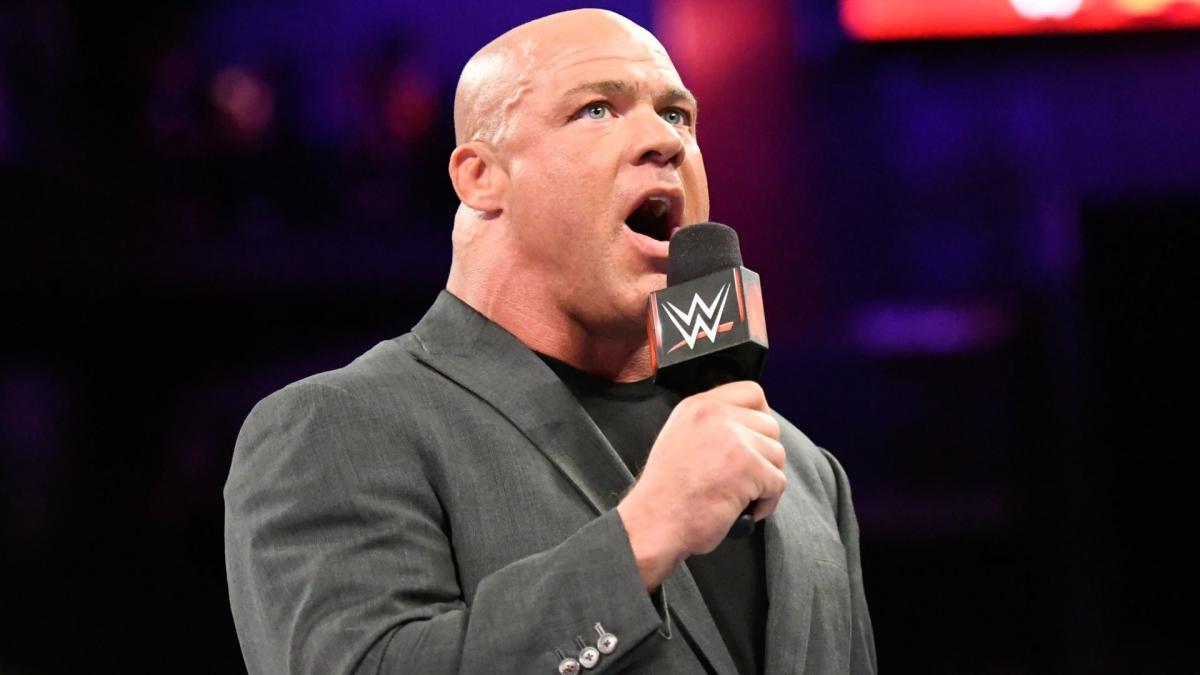 Kurt Angle ‘not doing much better’ after surgery 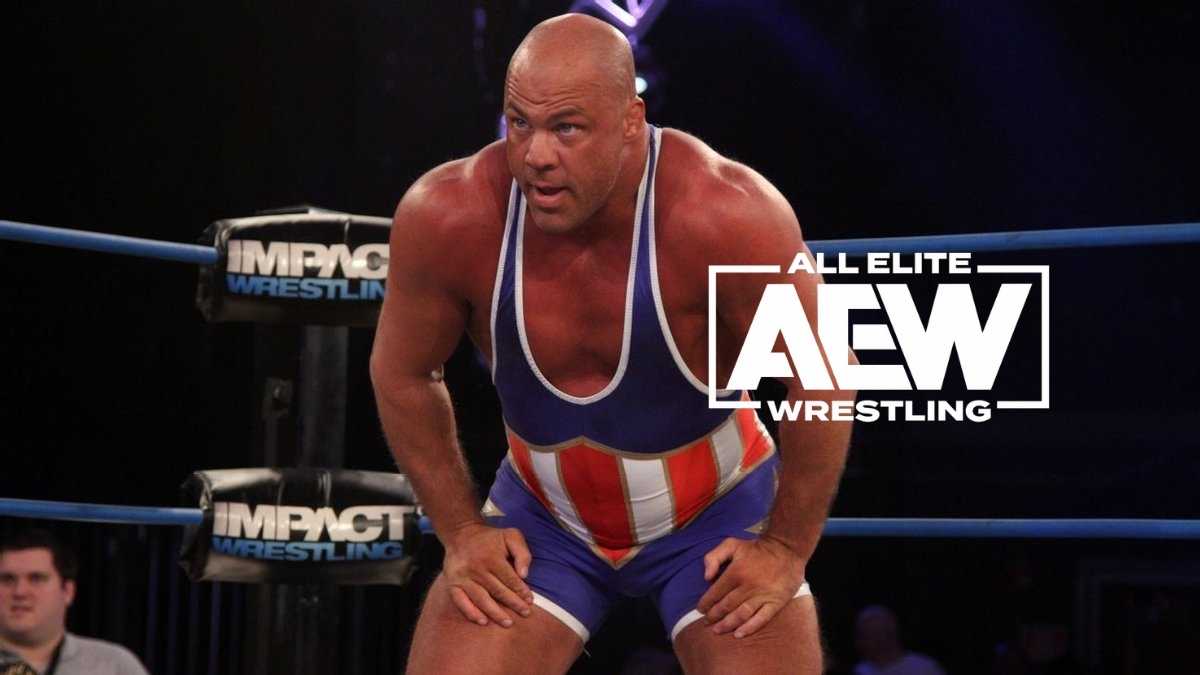 Kurt Angle: WWE Hall of Famer claims that AEW star is the GOAT